In December 2014, the UN General Assembly adopted a resolution to recognize 13th June every year as International Albinism Awareness Day, to promote the rights of Persons With Albinism.
13th June 2015 marked the beginning of a global campaign for the rights of PWAs.
This year, due to the pandemic (COVID-19) The OAM Foundation organised a global event on the conversation *Made to Shine, Reducing Inequality: Tales from Africa.* 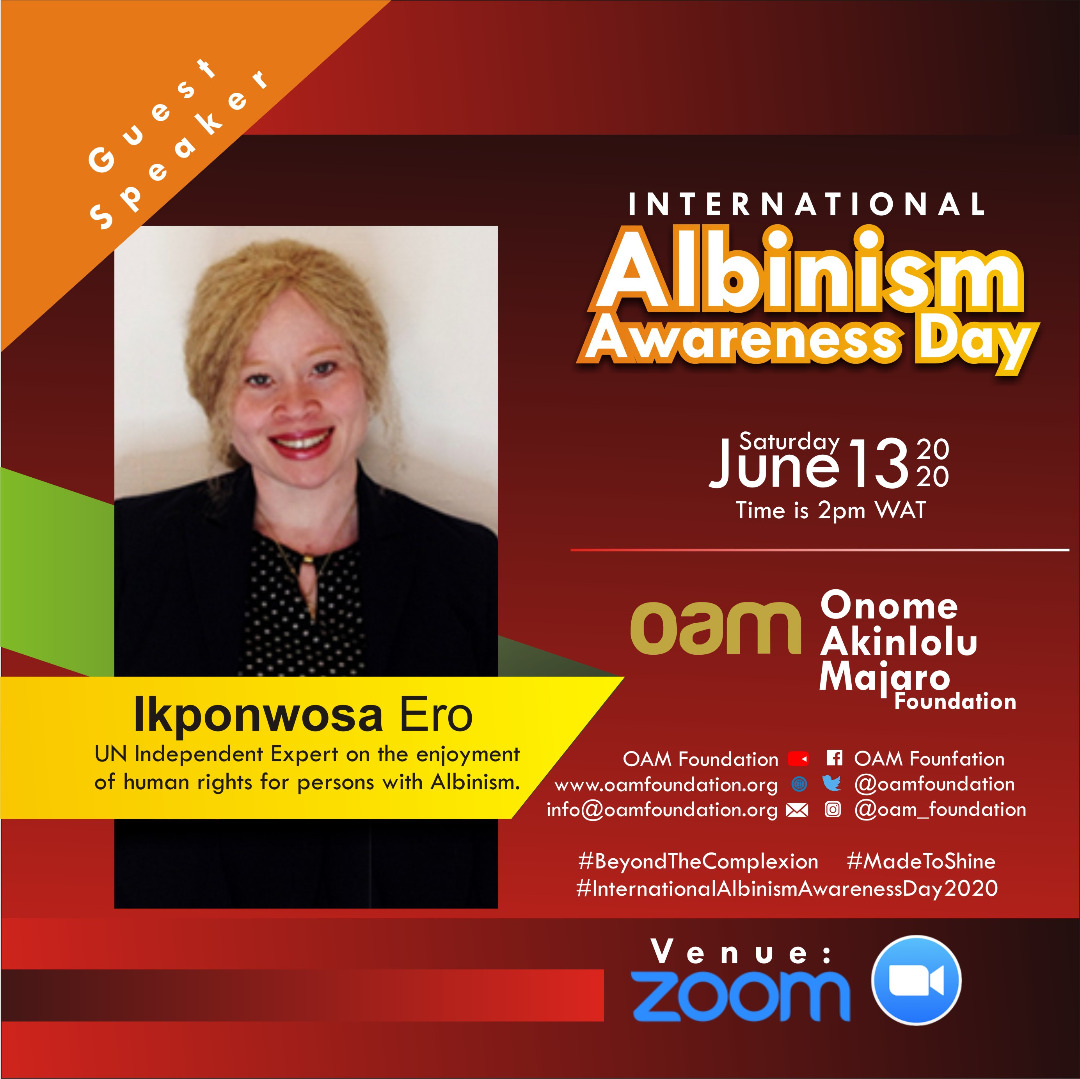 Ms. Ikponwosa Ero was designated in June 2015 as the first UN Independent Expert on the enjoyment of human rights by persons with albinism. The vision of Ms. Ero’s mandate is driven by the cross-cutting principle of the UN Sustainable development goals:  “leaving no one behind…starting with the furthest behind first.” Ms. Ero, a lawyer by training, has over a decade of experience in the research, policy development, and practice of human rights concerning persons with albinism.

She has advised organizations and governments around the world on human rights concerning persons with albinism including active engagement with the African Union and by developing the Global Albinism Alliance. Ms. Ero was born and raised in Ibadan, Nigeria but is originally from Edo State. She is therefore fluent in both Yoruba and Edo.

In 2015, Ms. Ero was listed by UNESCO as one of the top 70 women speakers worldwide. In 2017 she was listed among the 100 most influential Africans and recently, in March 2020, she was named the International Advocate of the year by the United States’ International Council on Disabilities. 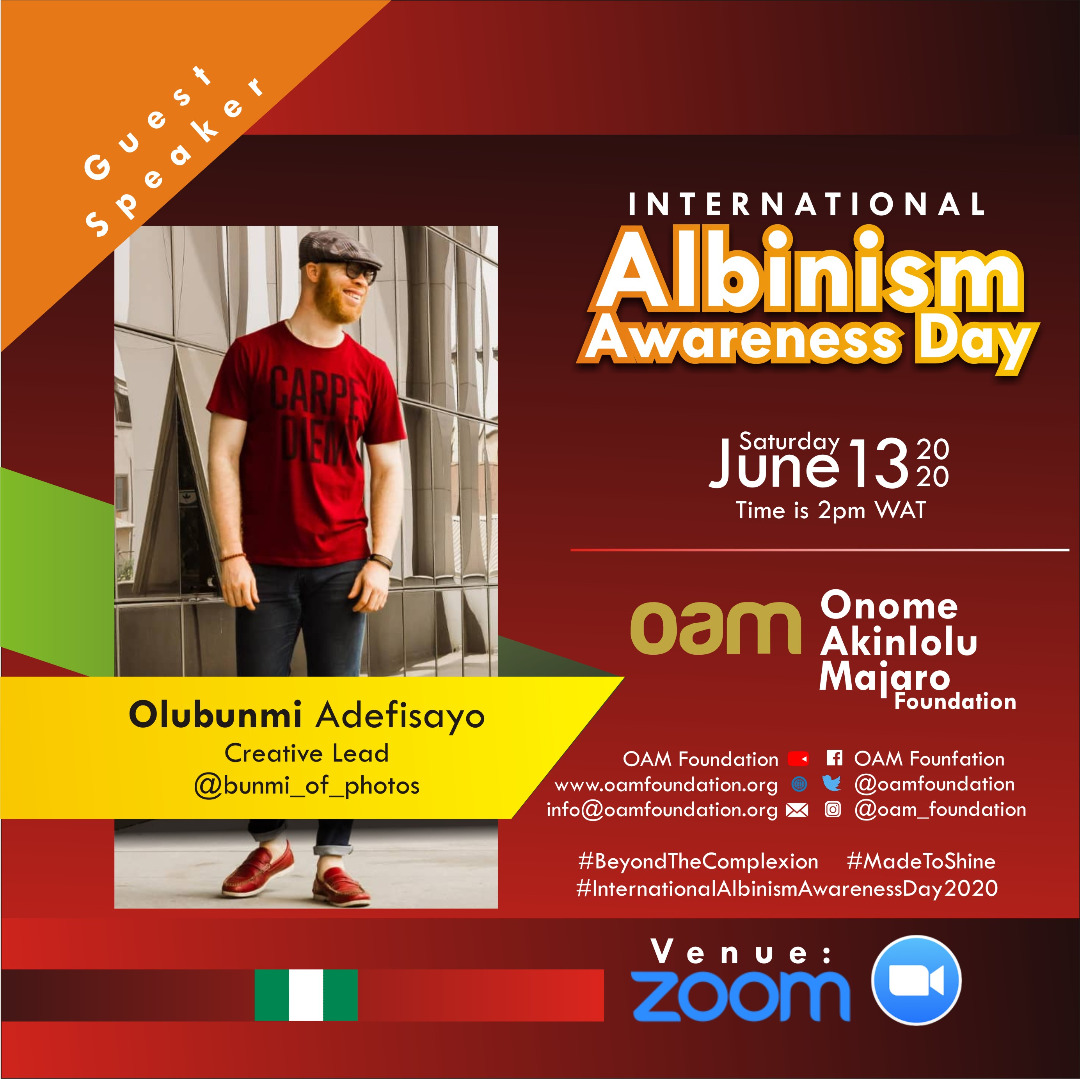 Olubunmi Adefisayo is the Head of Training and Leadership Development at Teach for Nigeria.
Olubunmi has a wealth of experience in the development space and has a passion for education and ending inequality in Africa.
Prior to Teach for Nigeria, Olubunmi worked as Program Director at Volunteer Corps Nigeria. He worked with a team of volunteers to provide free after-school tutoring to students in local public secondary schools around Lagos.  He has also worked as a research associate at the Lagos Business School and Research Associate at LEAP Africa where he was responsible for developing and implementing content for youth and business leadership programs.
Olubunmi holds Masters degrees in Education and Finance from the Harvard Graduate School of Education and the University of Dundee, respectively. He holds a Bachelors degree in Economics and Business Administration from Howard University, Washington DC. 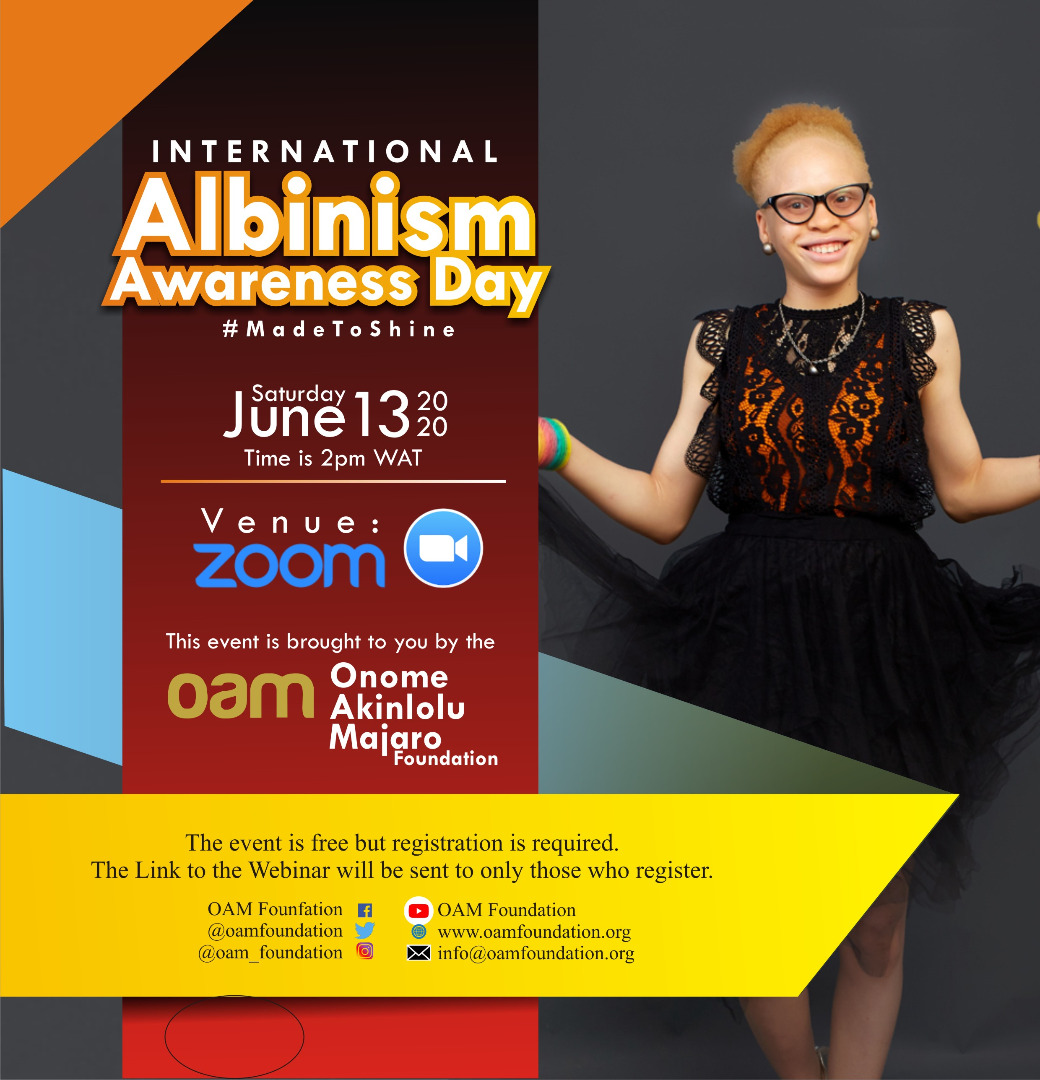 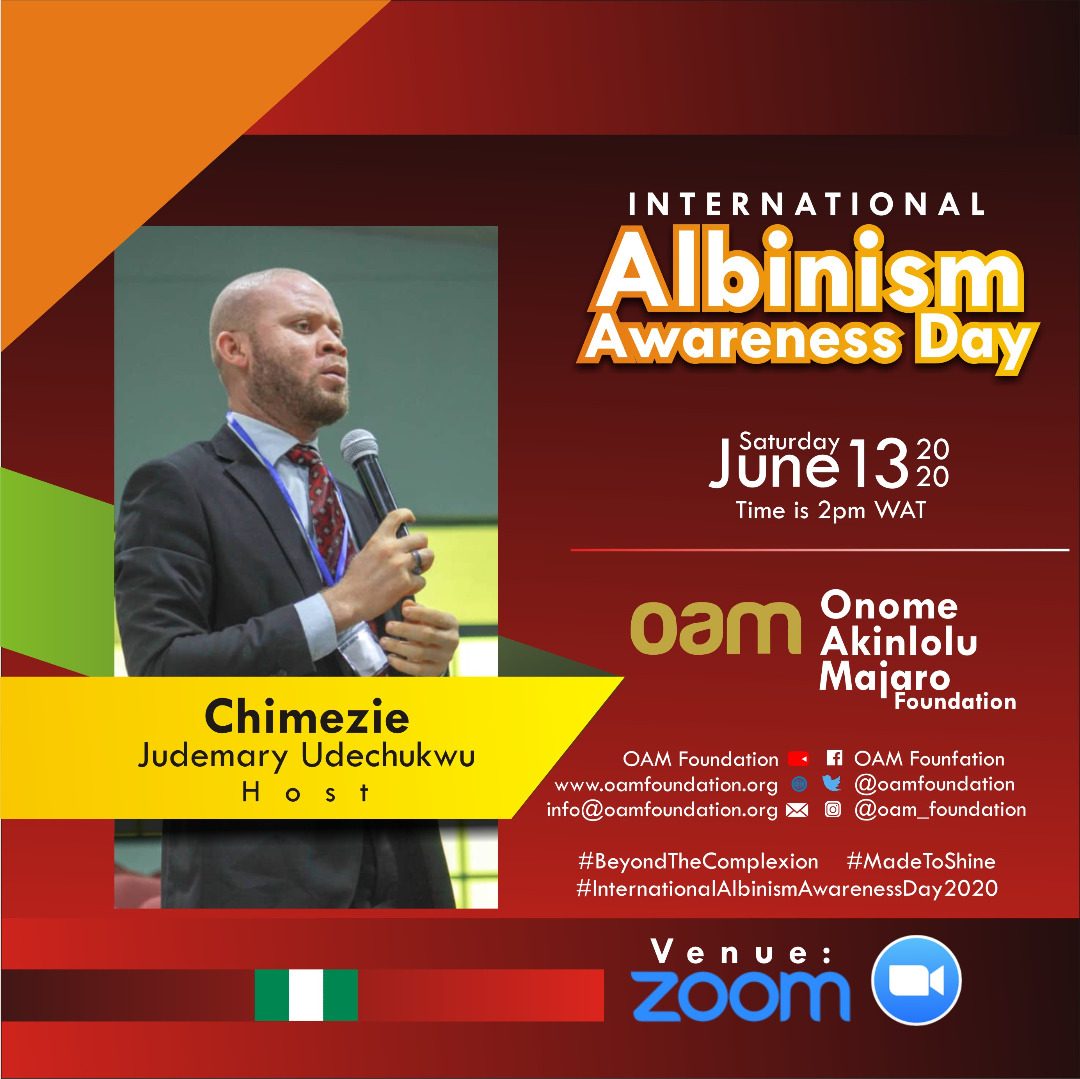 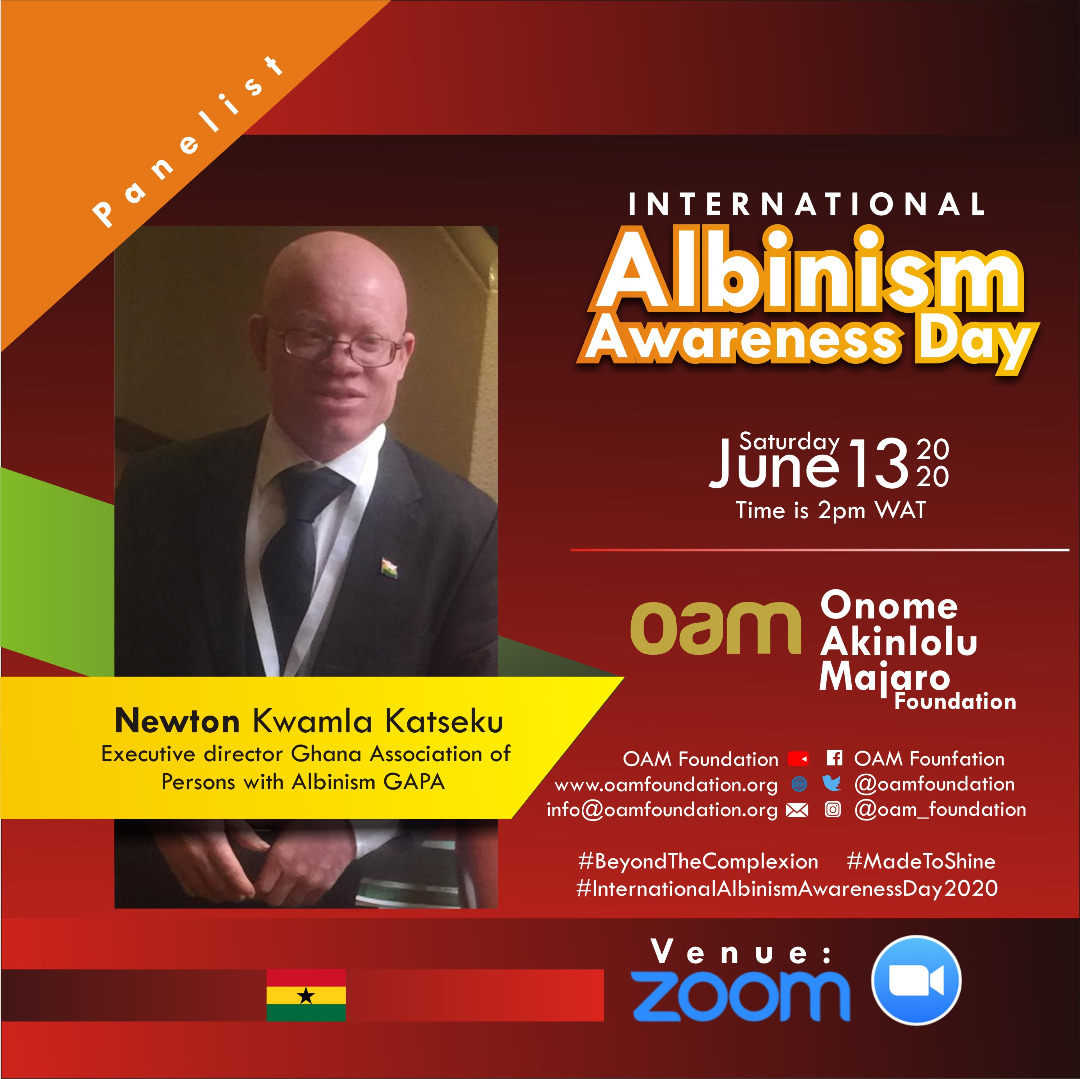 Born on June 19th, 1984 as a person with Albinism to dark families from Abutia Agove in the Ho West district of the Volta region.Newton Kwamla Katseku is a young  educationist and an astude disability and Albinism advocate in Ghana, Africa and the global world.
Currently the executive director of Ghana Association of Persons with Albinism GAPA,an advocacy and communication committee member of Ghana Federations of Disability Organization GFD , a board member of a number of unions and organizatios in Ghana and Africa.
Due to his hard work and dedication, he's is now a board member of Africa Union of Persons with Albinism in charge of Program, policies and communication. His played a significant role in the registration of the union together with other leadees. As an influential leader he is also the brain behind establishment of sub-regional Albinism federations of which West Africa has taken lead through him.
He had the opportunity to travel across the globe attending workshops, training and seminars on albinism, disability and education. He is a father to two biological children and several adopted children. 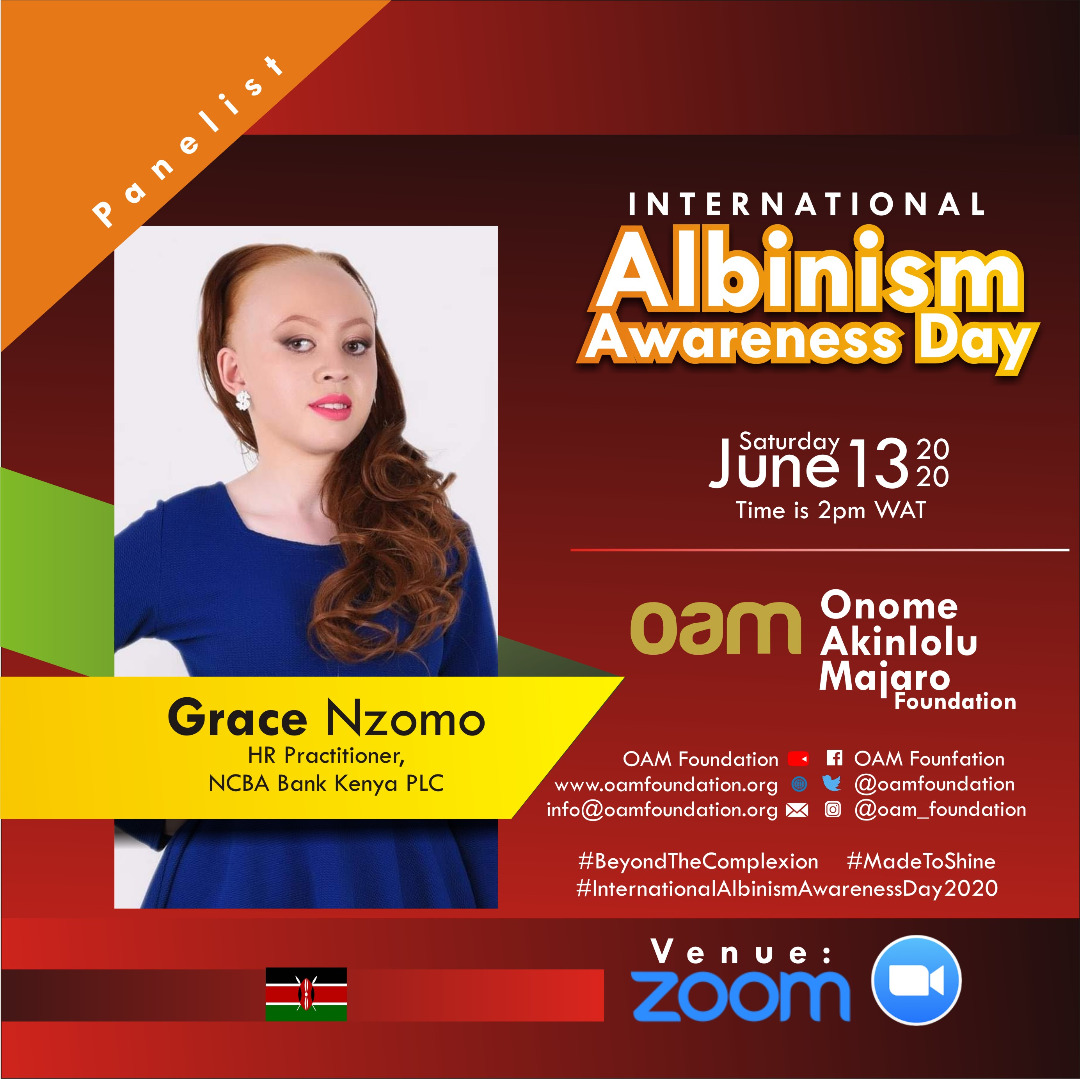 My name is Grace Nzomo and I am a 26 year old lady positively living with albinism. Many people are unfamiliar with the term “albinism,” but nearly everyone has heard of “albino.”

I am a graduate of United States International University-Africa with a degree in Psychology, with a minor in Management and I currently work as a HR Business Partner Support at NCBA Bank Kenya PLC.

In primary, I was enrolled in a school where the teachers had no idea what albinism was and how they could deal with it from their side but they did their best. In every new class I proceeded to, my mother had to explain to the class teacher that I had to sit at the front of the class and every other teacher who was teaching me had to write legible letters and numbers on the board. This was because I was short sighted and had to get really close to the board in order to see well.

My high school teachers took one look at me and decided that I cannot learn chemistry, physics and geography due to my ‘poor’ eyesight. I was also informed that since I was visually impaired, I had to learn Braille as I would be using it in my final exam.

Unfortunately, at present 70% of Kenyan children with albinism attend schools for the visually impaired at Primary and Secondary School level where they are forced to learn in braille yet they are not blind. That basically narrows down their career choices by 50% which I believe is a violation of one's rights to holistic education.

Most children with albinism in Kenya are kept hidden away from others where they develop a very poor self-concept which later on leads to low self-esteem. Others are raised up in single-parent families where the father disowns the mother and child alleging that his wife has been unfaithful to him with a 'white' man hence bearing a child with albinism. Fortunately, my parents were aware of the genetics behind albinism and they raised me up in a stable environment where both parents were always there.

Supporting the efforts of Dr. Choksey Albinism Foundation is in the interest of my work to improve the lives of people with albinism. As its former programs officer, I still dedicate my time and skills to provide workable resources to children with albinism and their parents who may have never had the hope of living fearlessly in this discriminative society. Looking into the eyes of a child with albinism and his/her parent, and providing encouragement is the spark I need to continue in my mission to support people with albinism.

I envision a society in which persons with albinism are fully integrated, appreciated and empowered to realize and live up to their full potential. Being able to brighten the lives of those I come into contact with is only the beginning and accepting opportunities of impact such as this meeting of the Global HIV Prevention Coalition will propel me in my mission to empower people with albinism through the leadership and developmental skills the program will equip me with.

After all, ‘Education is the most powerful weapon which you can use to change the world.’  Nelson Mandela. 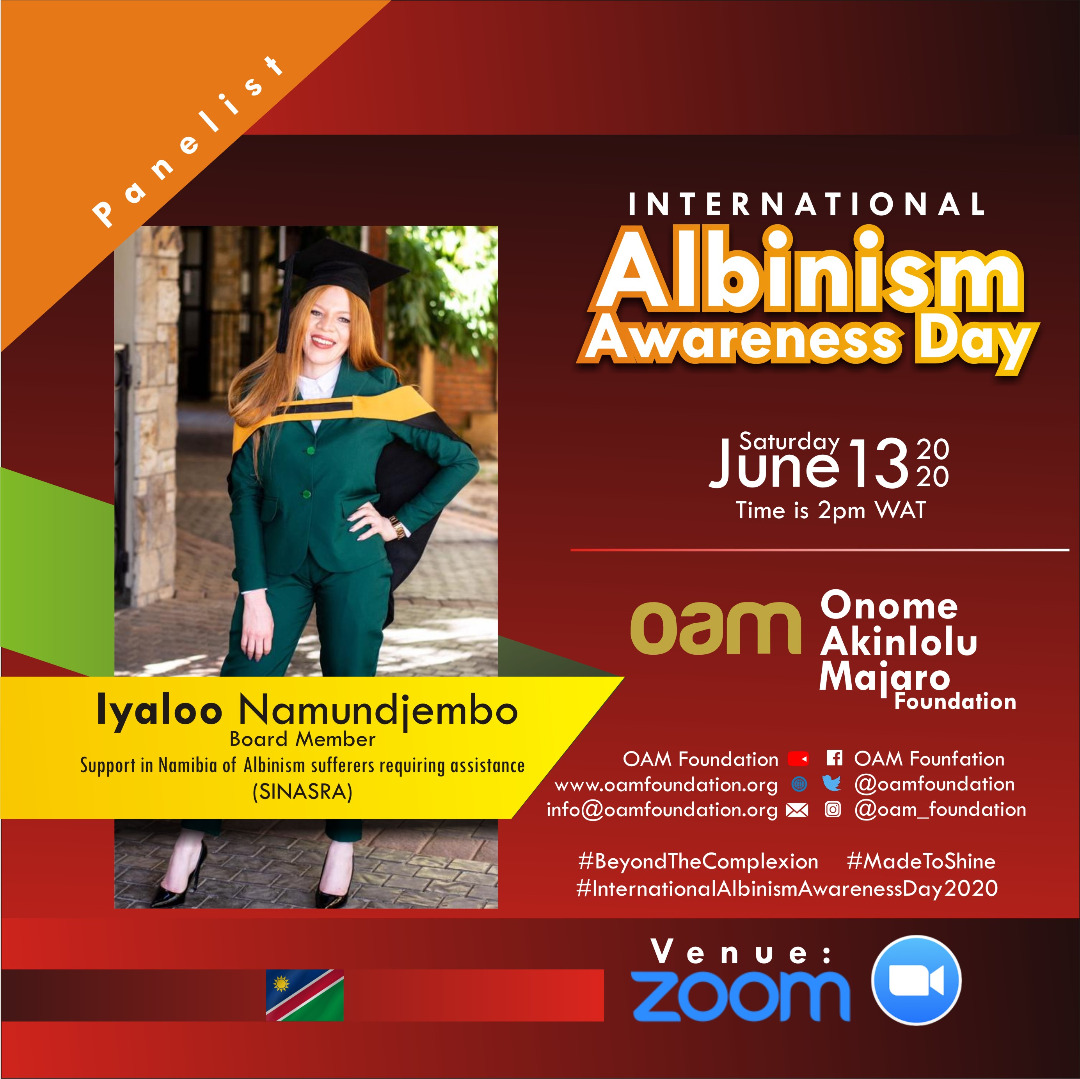 She wants to engage more with influential decision-makers and thought leaders in order to change and correct the views and myths that people have on albinism. She's open to challenges, conversations, and an exchange of ideas.

She is an economics graduate and her long-term goal is to become a competent economist & an influential albinism advocator; she wants to use her untiring commitment and drive to bring more dignity and independence to the citizens of developing countries. 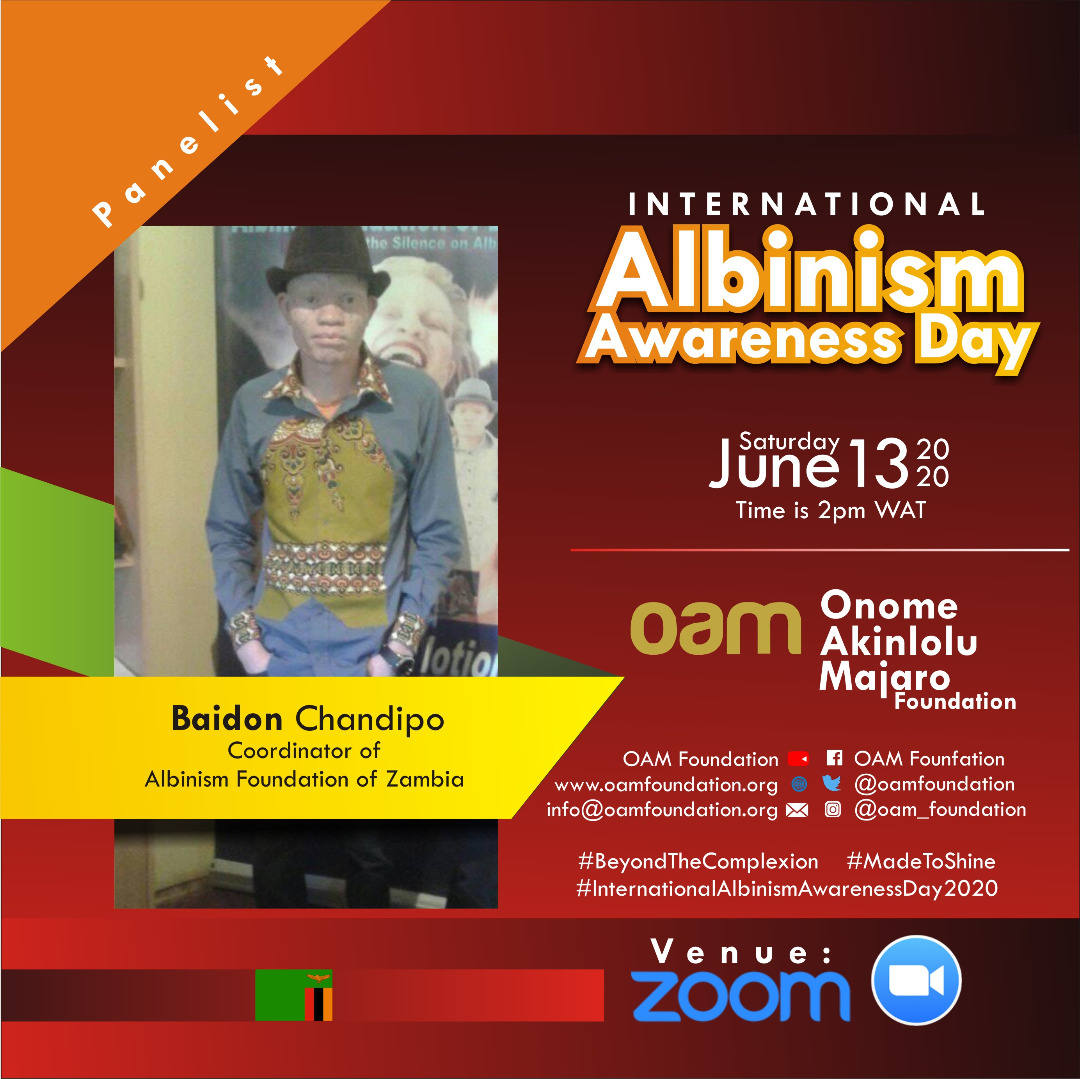 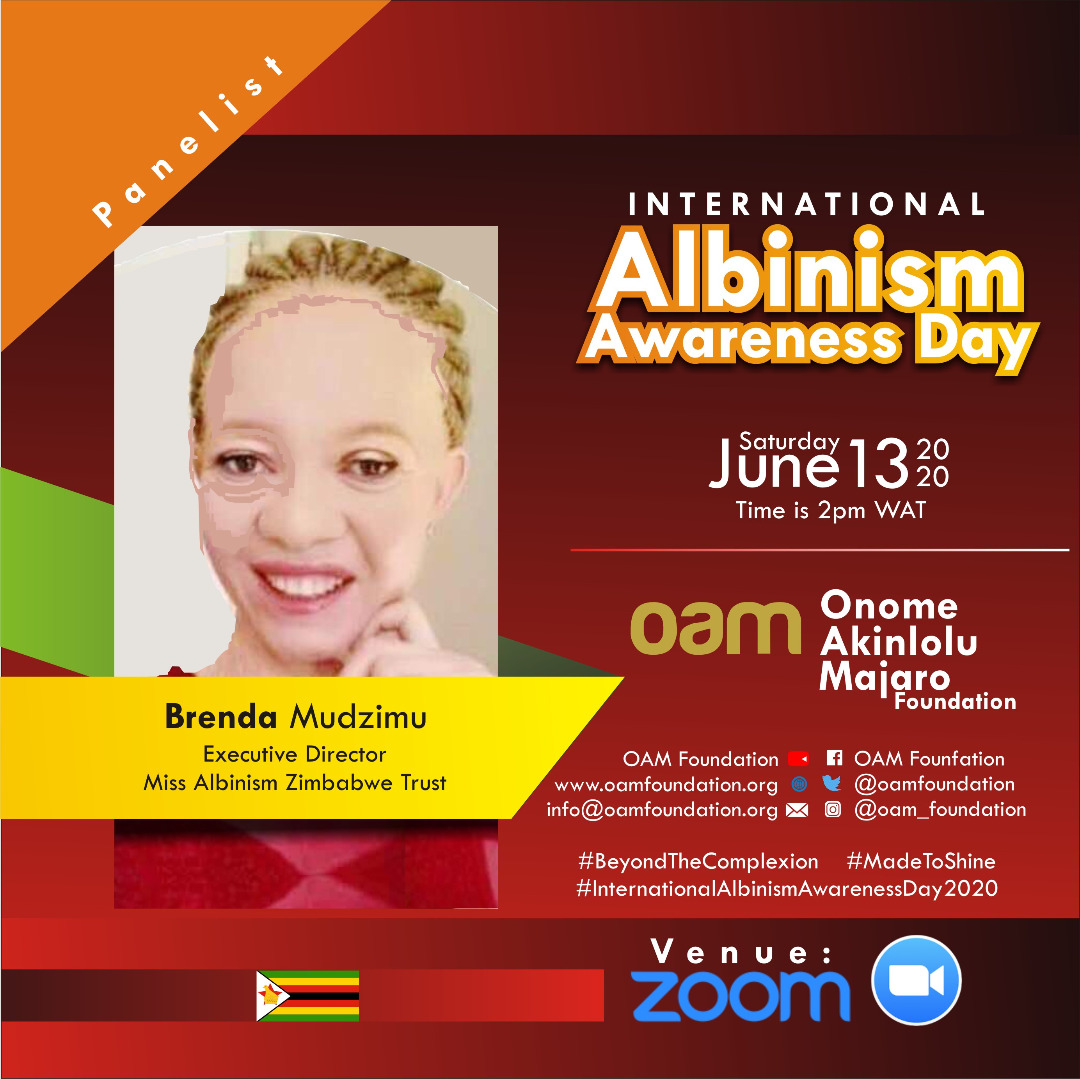 Brenda Mudzimu is a Zimbabwean lady with albinism ,an advocate for persons with albinism , the executive director of Miss Albinism Zimbabwe Trust , an organization that holds annual national and African pageants among other things with an objective to raise awareness of the current circumstances and the rights of people with albinism and to draw the attention of the public at large to the need for people with albinism to be accepted as equal citizens and to claim their rightful place in the society. She coordinates Mr

and Miss Albinism Africa to unite people with albinism across African continent so as to help build confidence .

Mudzimu trained as a Registered General Nurse, a cosmetologist , a merchandizer and did conflict resolution program .

In addition to being the executive director of the MAZT, Brenda is the project coordinator of the African Union For Persons With Albinism (AUPA), an organization which is mainly focussing on Alliance For Rights – Africa Towards Disability Inclussion (ARADI)project. This project ensures the ratification and the signing of Africa Disability Protocol to the African Charter on Human andPeople”s Rights. 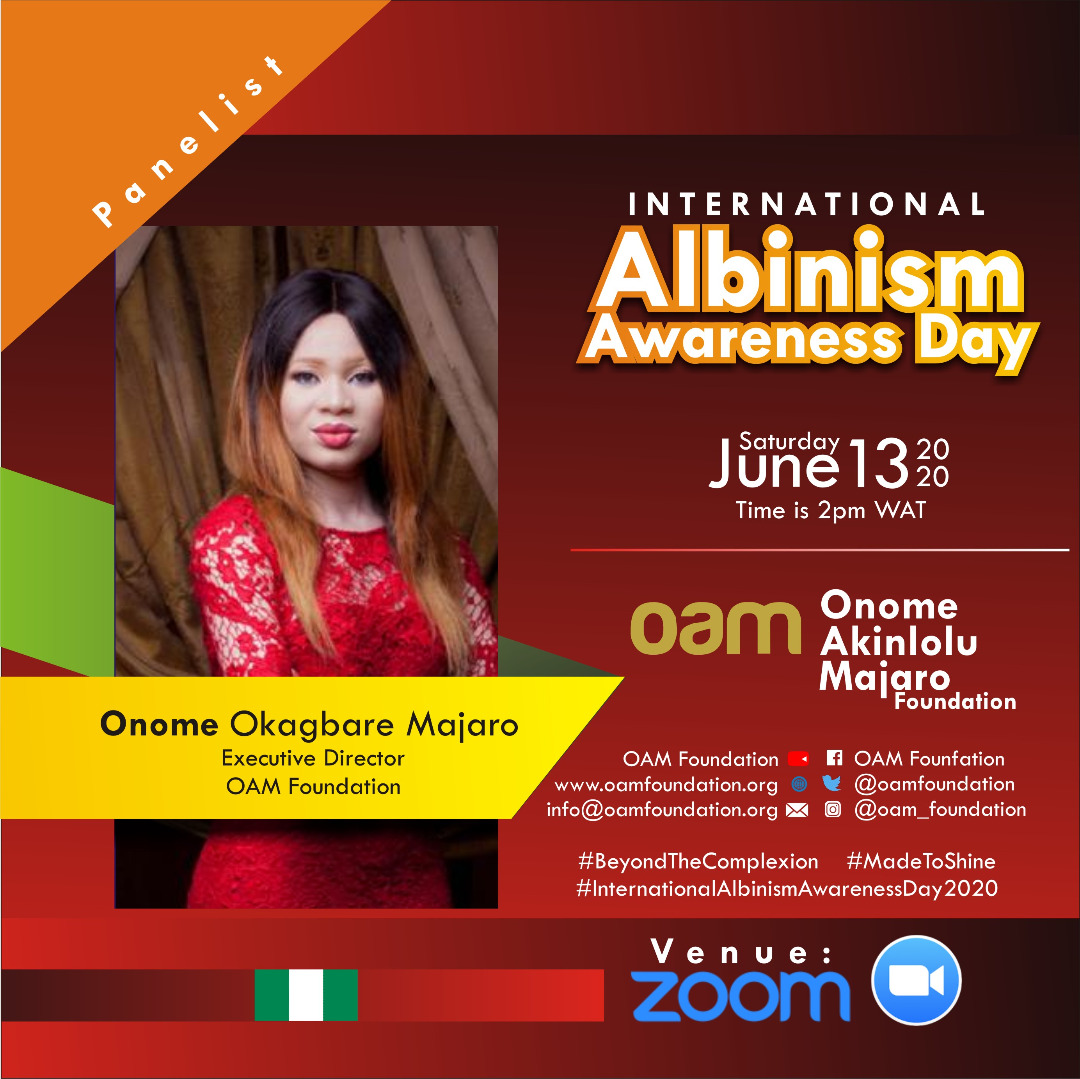 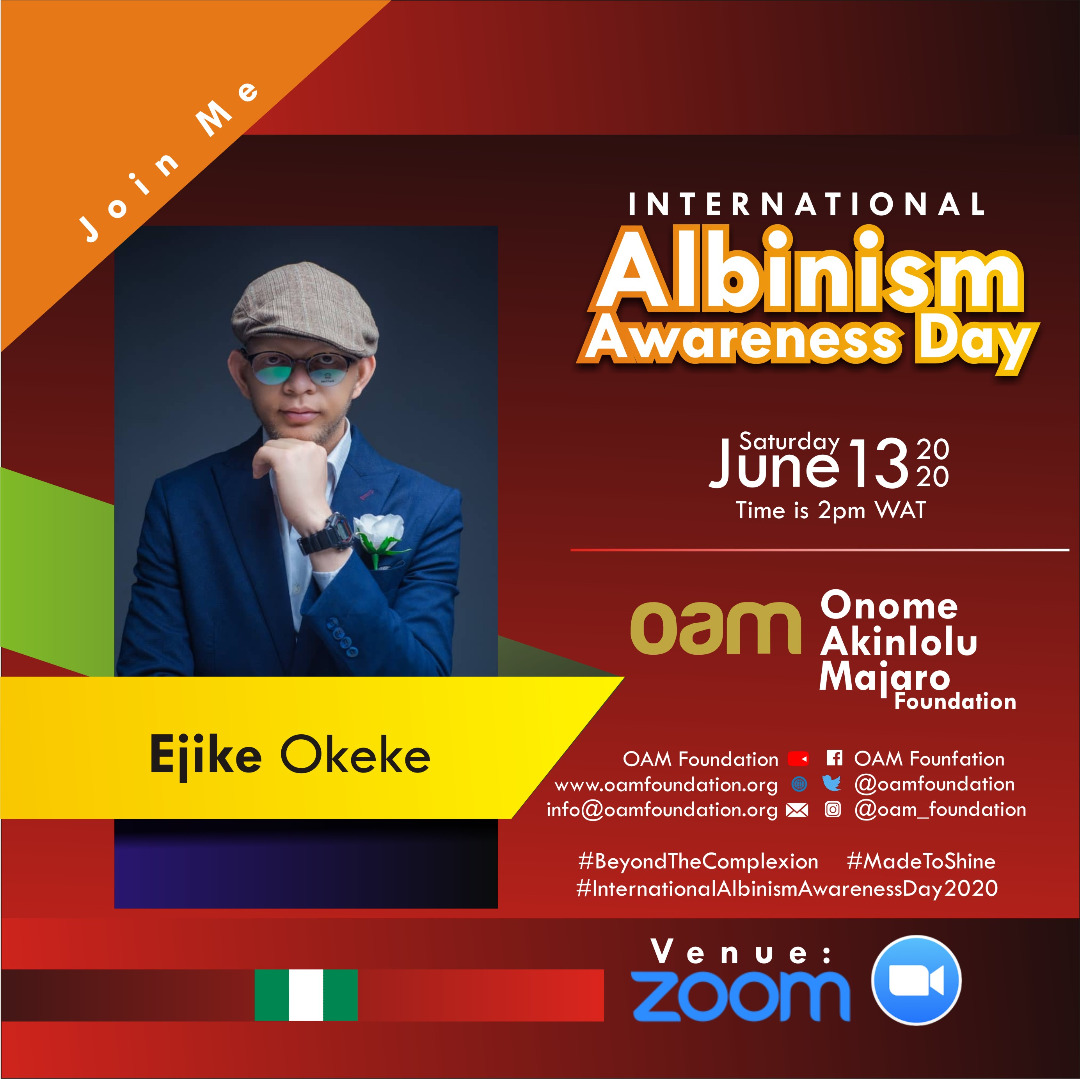 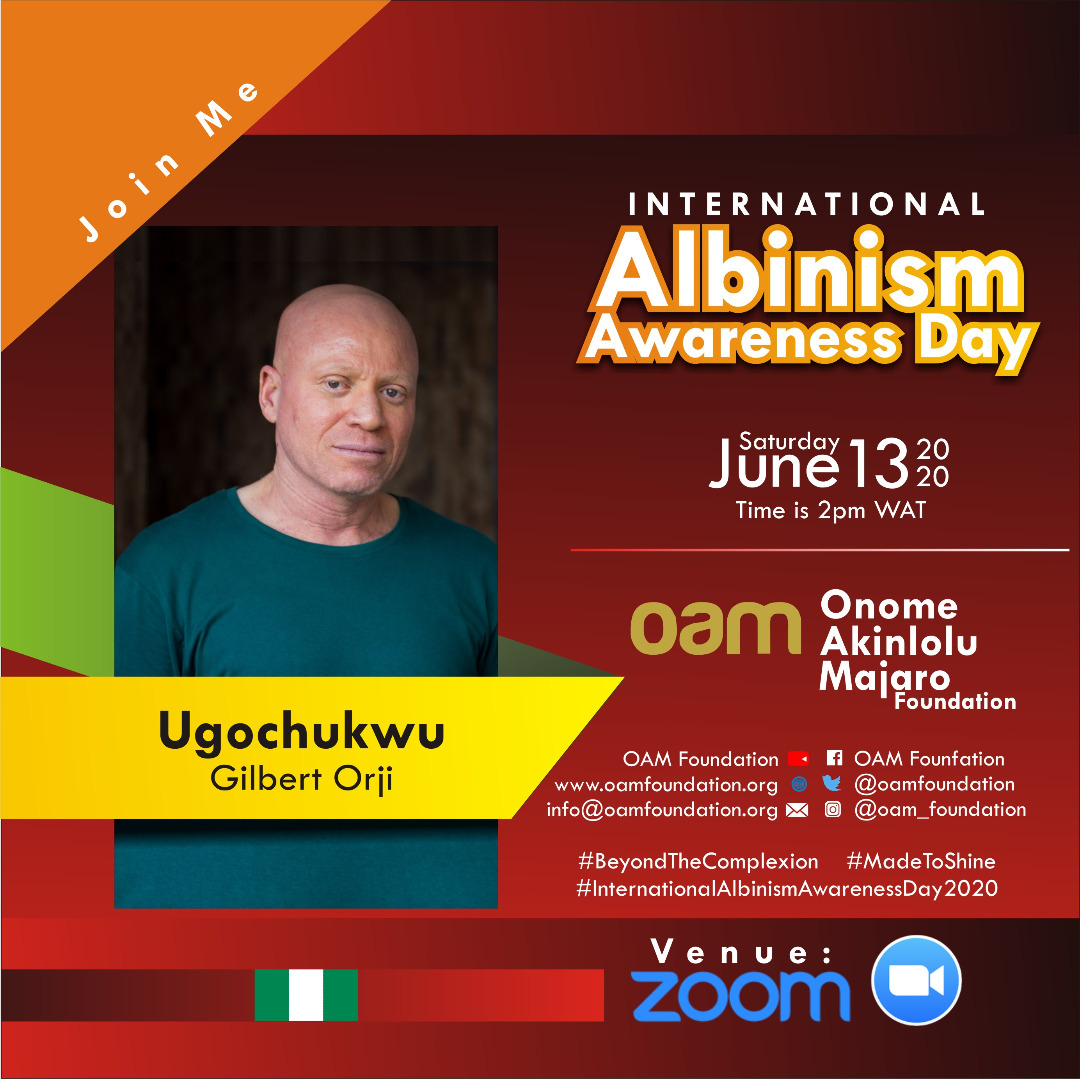