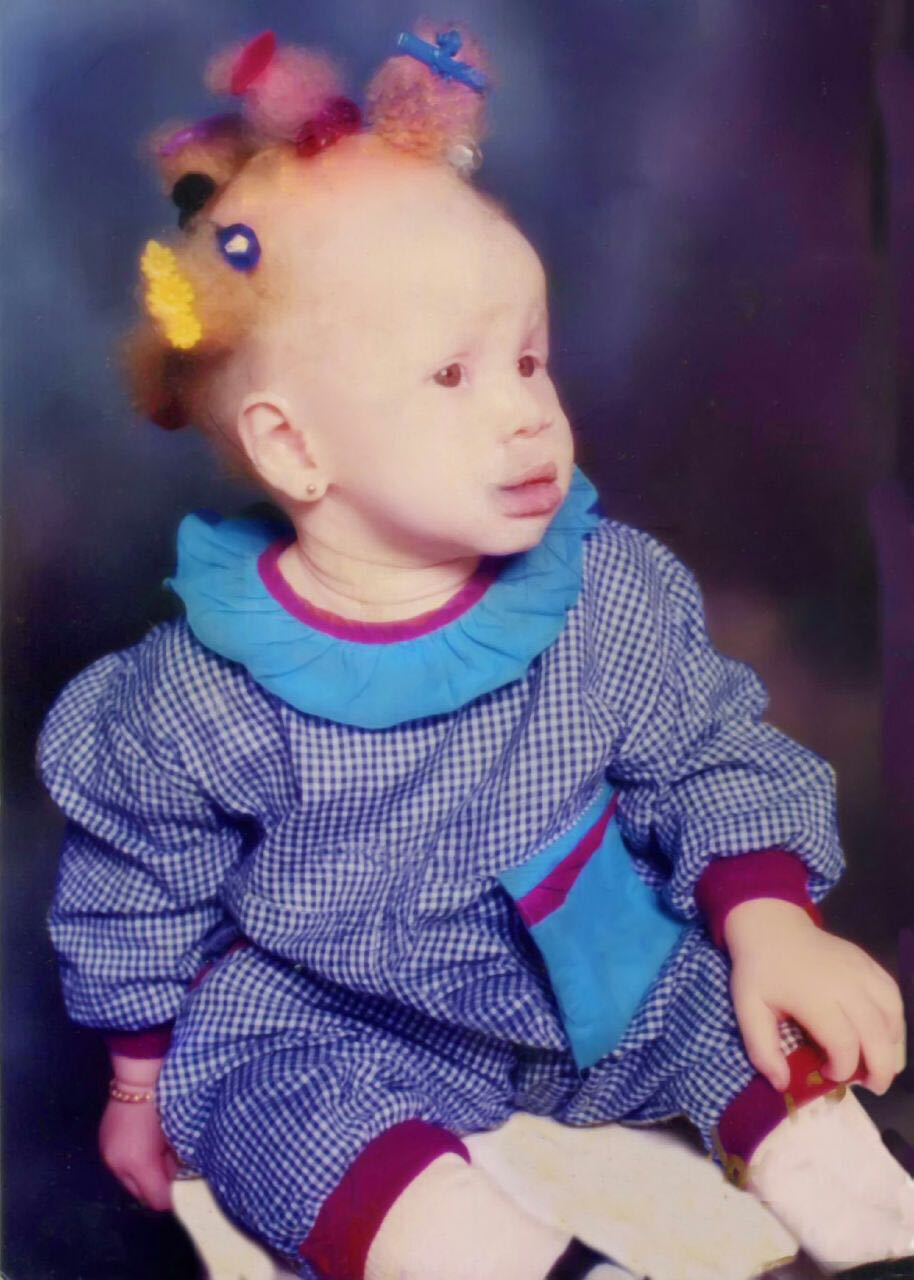 October 25, 1990 remains a remarkable day in my life. That was the day I gave birth to my first child and beloved daughter, Onome. I was terribly shocked when I saw her. I kept staring at this child with white hair and skin.

Onome’s Dad was surprisingly calm. He was too elated to care about her skin colour. I on the other hand kept hoping for a miracle that would change the white hair and skin overnight. The much awaited miracle of course never happened.

I prayed to God and finally got a conviction that He had given me a child with albinism for a reason. I asked God to provide all the resources I would need to make my child the best in the world.

The doctor that attended to me could see my fears. He was really helpful providing my husband and I with dos and don’ts for Onome.

My quest to make my child the best made me begin to read all I could about albinism. I learnt everything and asked questions where necessary.

Onome’s birth drew a lot of attention, questions and comments from both friends and family. While some people had the guts to say how they felt to my face, others were too cowardly to face me, so they turned to backbiting. Some of the comments really got to me but I got to a point where I realized I didn’t owe anyone any explanations.

My sister who lived abroad was so concerned about the sensitivity of Onome’s skin that she suggested taking her abroad to live with her as the weather there would suit her. I blatantly refused as I was on a quest to prove to everyone that it was possible to have a child with albinism that has a good self-esteem and a good skin. 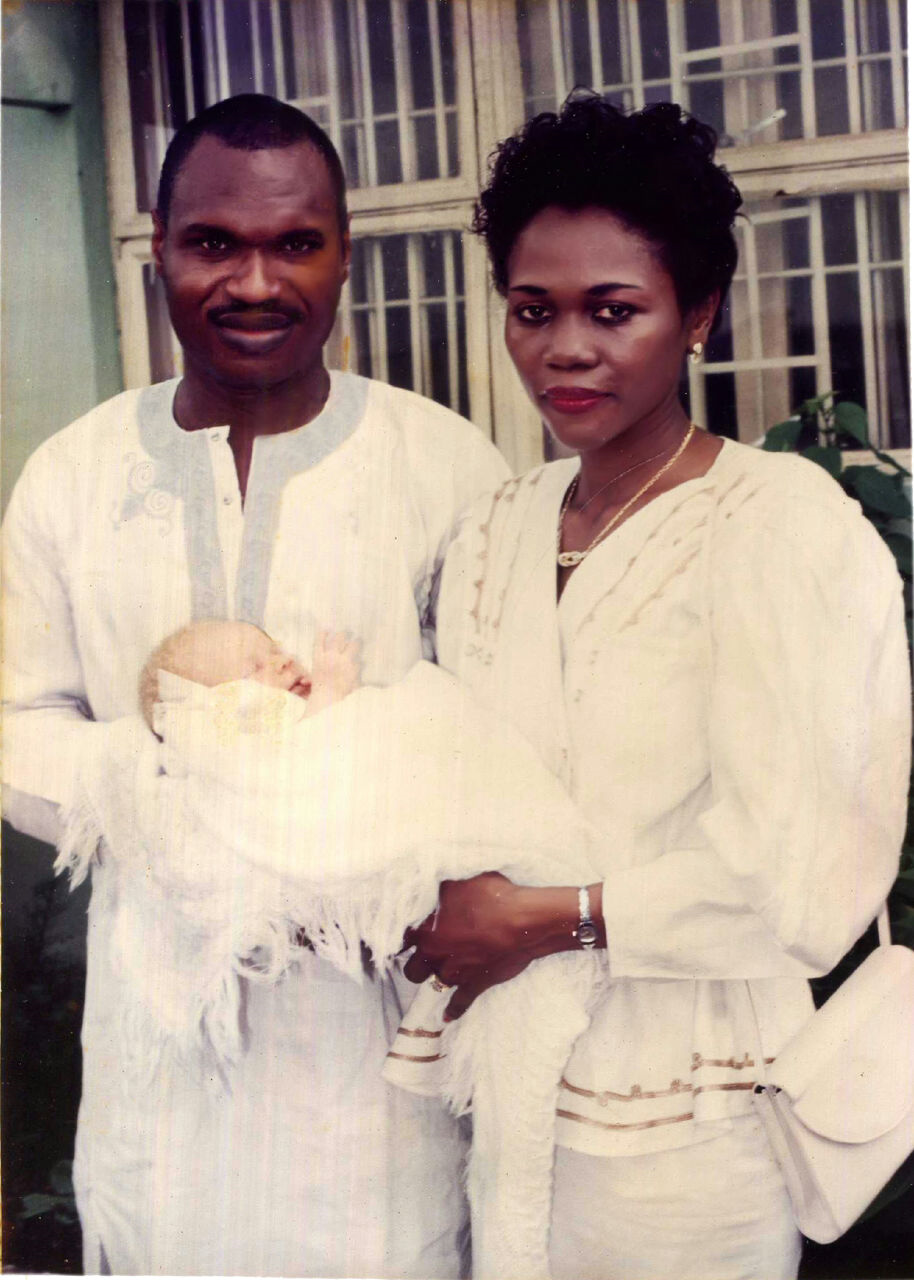 From infancy, Onome used a special cream, soap as well as sun block. I also took her to visit the dermatologist quite frequently.

It was indeed quite challenging as she began to withdraw. She hated going as she was afraid  that people would stare at her.

I understood early enough that her colour would always make her stand out so I used that to her advantage by ensuring that she always looked good and neat. She had the best of clothes, shoes and accessories. People admired her.

I made it clear to her teachers that she must always sit in front and never get involved in physical activities.

I knew I had to help build her self-esteem so I took her out a lot. She was my “handbag”. I would dress her up so gorgeously just to show her off. I wanted her to get used to people looking at her. I would always tell her how beautiful she was. There were instances where I would purposely sit with her at the back of the church so that she would have to walk all the way to the front to give her offering.

Onome started to use umbrellas in secondary school to protect herself from the sun. I would buy very fanciful umbrellas and encourage her not to go out without an umbrella. She was nicknamed “umbrella girl”.

Every child with albinism faces discrimination and stigmatization from the society in one way or another. Onome had her own fair share. Some teachers often used her skin colour to get back at her. Some students also did same. I fought all these battles for her while teaching her to always fight for herself as I would not always be there to fight for her.

In a bid to further boost her self-esteem, I called her albino, afin, oyinbo, yellow and all other names the society would call her. I wanted her to get used to these names so that when people call her these names, she won’t feel bad.

By the time she got to the University of Lagos, I knew I had to give her freedom. I was confident that I had done my part by preparing her for the good, the bad and the ugly.

Her first year in the university was quite difficult. It was her first time outside home. I however ensured that she was always looking good.  This attracted a lot of people and soon she became popular in Unilag. 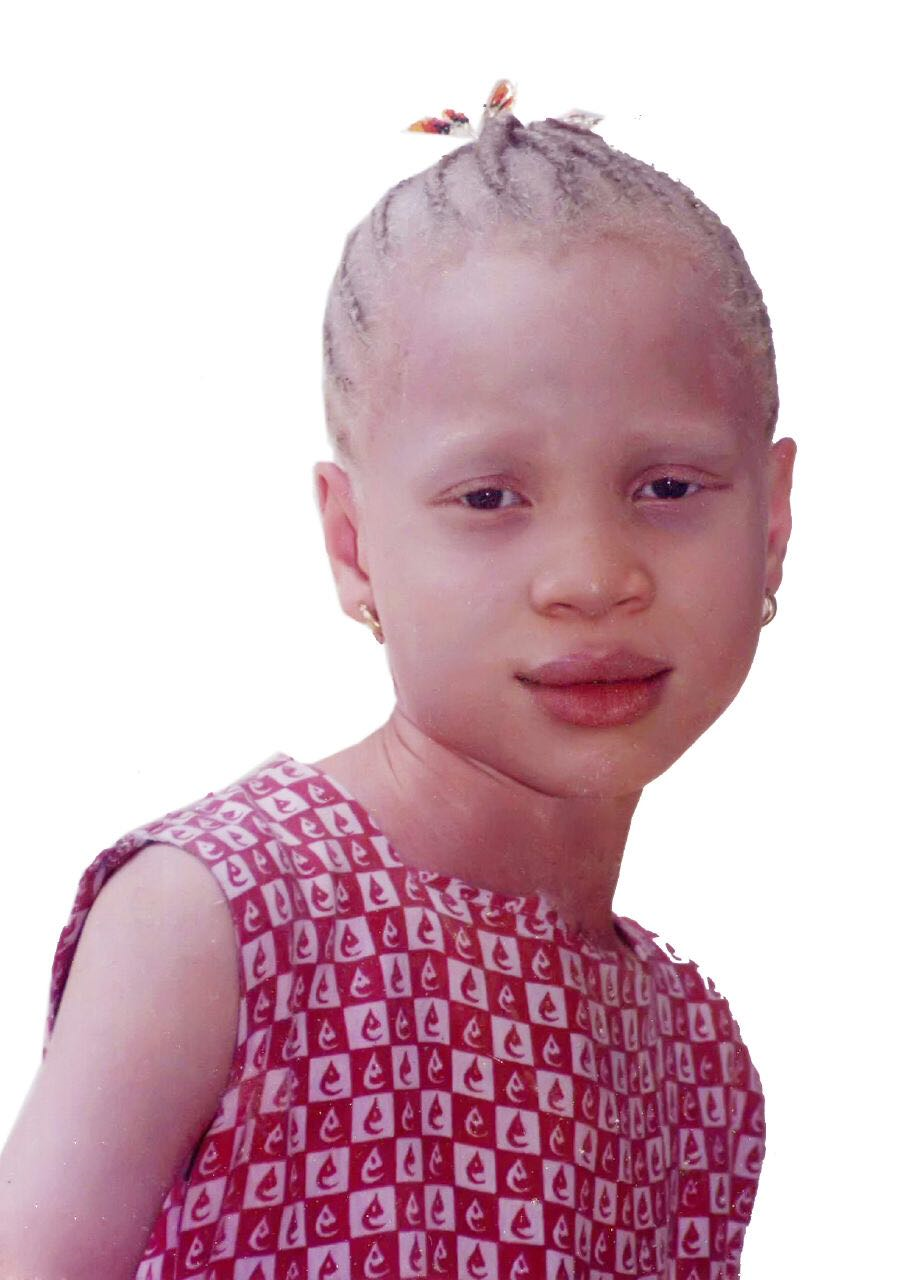 Like every other young lady, she had toasters and admirers some of whom used her skin colour against her whenever she turned down their advances.

I made it my duty to make friends and keep in touch with her friends and course mates to help and protect her. I understood that she would need help in my absence.

There was an occasion in the university where she was scared to leave her hostel because a group of guys would always tease and call her names while she passed by. I encouraged her to wave and dance as they called her names. This of course worked as she soon became friends with this group.

While growing up, I always taught Onome that nothing is impossible once you have God and believe in yourself. I encouraged her to take on challenges and ensured that she overcame such challenges. I remember how scared she was to learn how to drive due to her eye sight which is a normal condition for people living with albinism, I however encouraged her, enrolled her in a driving school and eventually she was able to drive.

After graduating from the University of Lagos, Onome proceeded to the U.K for her masters. While in the U.K, most of her colleagues felt she was Spanish or Russian.

From infancy to adulthood, Onome ate every kind of food. I didn’t have to make any special food for her. There are many misconceptions about people living with albinism not being able to eat food with salt, crayfish and the likes. There is no exception to what my daughter; Onome can eat even if she has preference for certain meals. 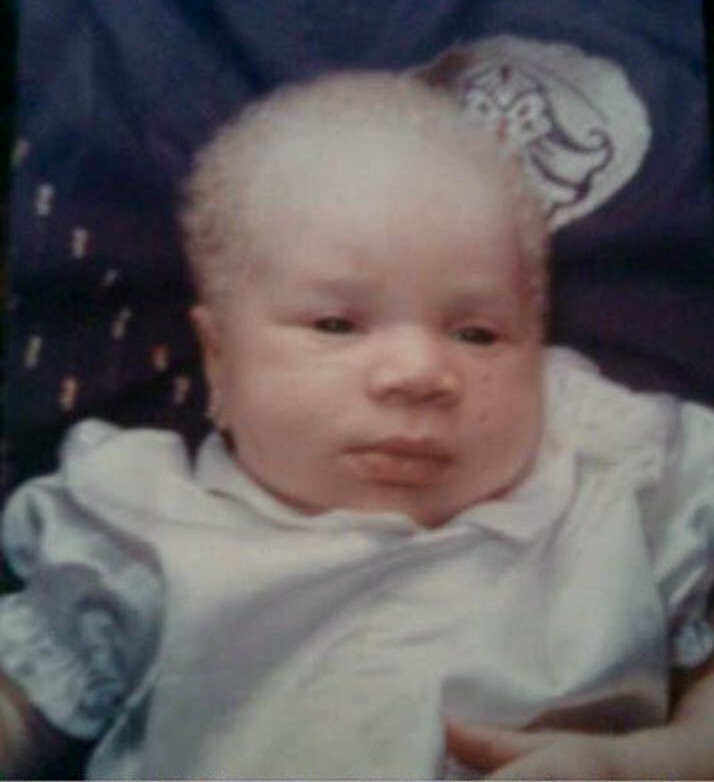 How I feel today

I am a proud mother as a lot of people living with albinism look up to my daughter. Her kind, sociable and caring personality draws people to her. She has become a mentor to many both within and outside Nigeria who have hope that if she can achieve it, they can as well. It took a lot of hard work, patience,  consistency and of course the Almighty God.  I am proud of the woman she has become.

Today, Onome has a foundation (Onome Akinlolu Majaro Foundation) that is aimed at eradicating discrimination against albinos. Onome has featured on various media such as Wazobia FM, Radio Lib, Wazobia Max, Genevieve Magazine, Bella Naija, just to mention a few.  She is indeed a success story and I flaunt her every time I have the opportunity to do so.

She is a public relations specialist, a wife and a mother. What else can I ask for? I made a pact with God at her birth and I am glad it has become reality. It is indeed possible to have an albino with a good skin and personality in Nigeria. 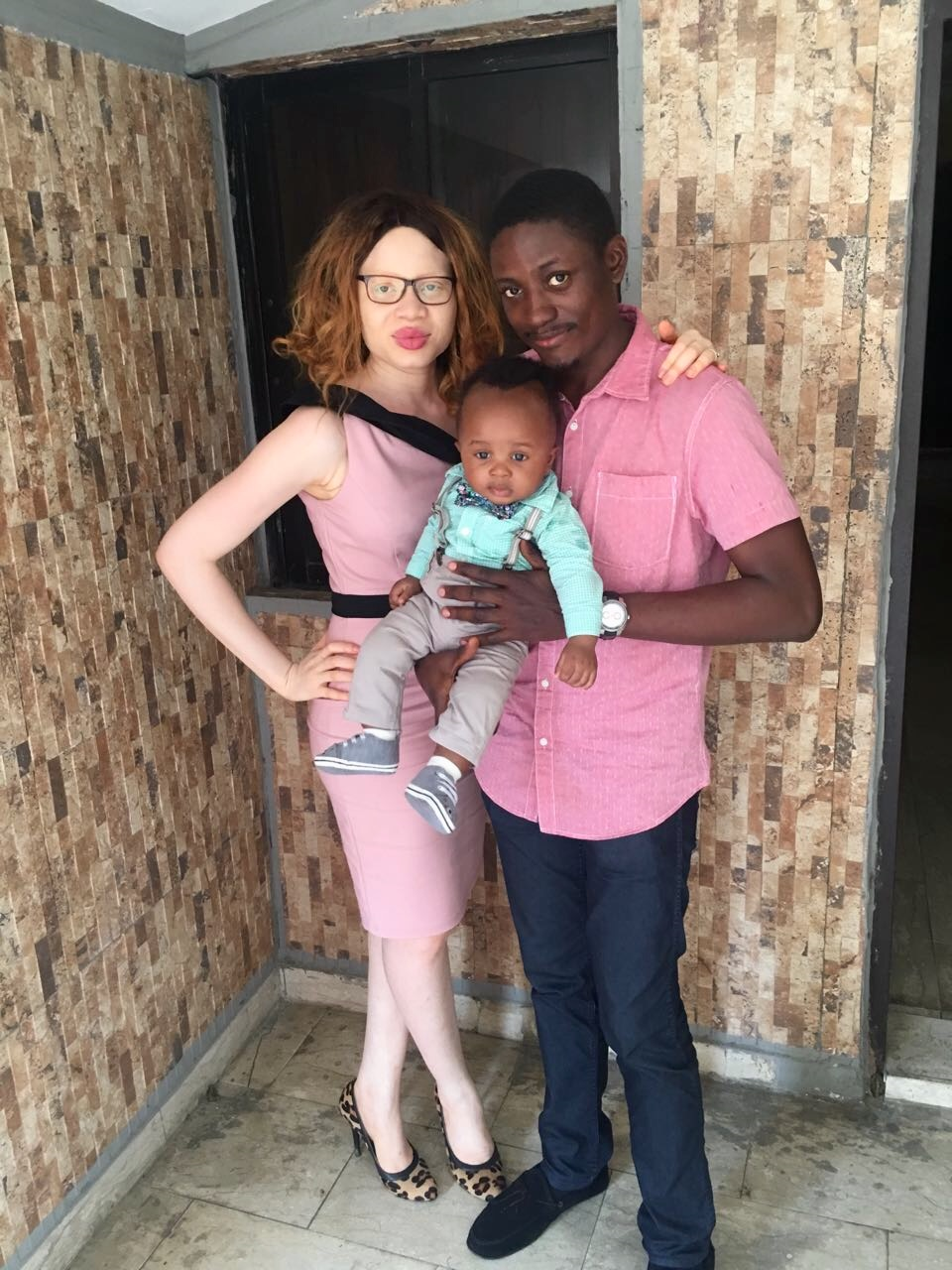 Helping other mothers of children living with albinism

Having a child living with albinism has made it possible for me to help others. My success with my daughter has made other mothers of albinos draw close to me. I am also drawn to women that have children living with albinism as I see it as an opportunity to help them train and groom their children.

When Onome was in Secondary school, there was another girl living with albinism in her school. This girl hated going home during the holidays. Some teachers had to plead with me to have a chat with her mother. I agreed to do this and I discovered that having this child had caused this woman her marriage. She was so hurt that she put the blame on her child and sent her to a boarding school to avoid seeing her frequently. I had to encourage her to love her child despite what had gone wrong.

I remember another woman who approached me some years back while I was with Onome to ask if she was my daughter and how I am able to go out with her without any shame. She confessed that she also had a daughter living with albinism. She had sent her daughter to live with her grandmother because she was embarrassed to take her out. Her husband had in fact left her to marry another woman because he felt she gave birth to an albino because she cheated on him. I was able to help this woman in the little way I could.

I have met quite a number of mothers who have children living with albinism and I can boldly say that having a child living with albinism tends to affect mothers more than fathers. This is because women are very sensitive and emotional and as such get easily affected by negative comments. It is even worse in instances where there is no support from the fathers. 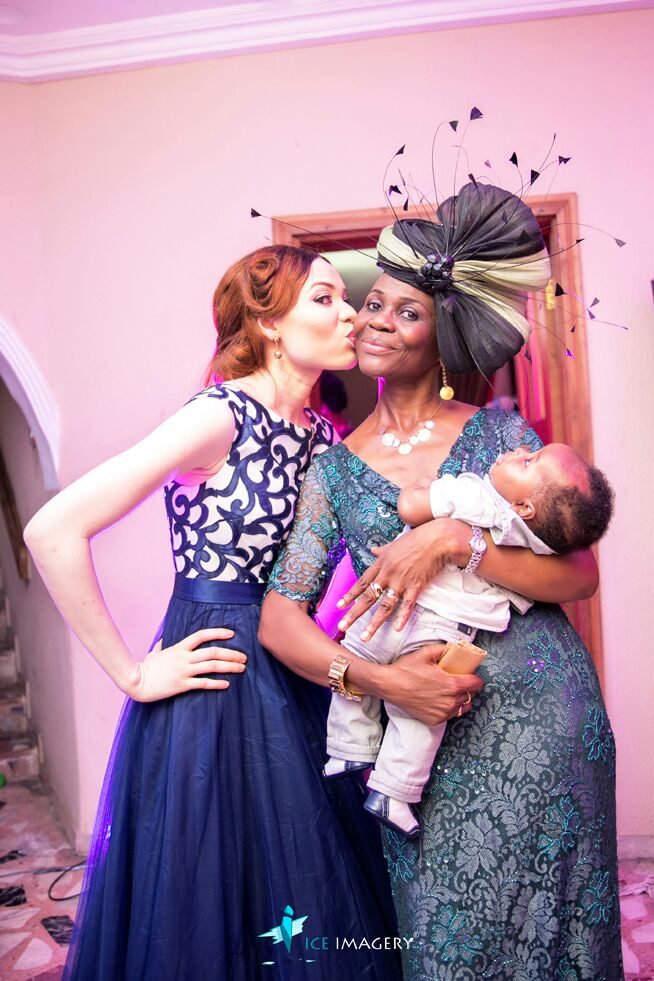 Advice to parents of children living with albinism

There is absolutely nothing wrong with having a child living with albinism. I advise that parents of these children “spoil” them with love so that others can love them too. This is quite important because if the upbringing is faulty, it would affect the child for the rest of his/her life.

Parents of children living with albinism also need to understand that the sun is the number one enemy of their child. Once the sun can be avoided, 80% of the job is actually done. Their eyes also need to be taken care of. Parents should also ensure that their children have a good self-esteem. 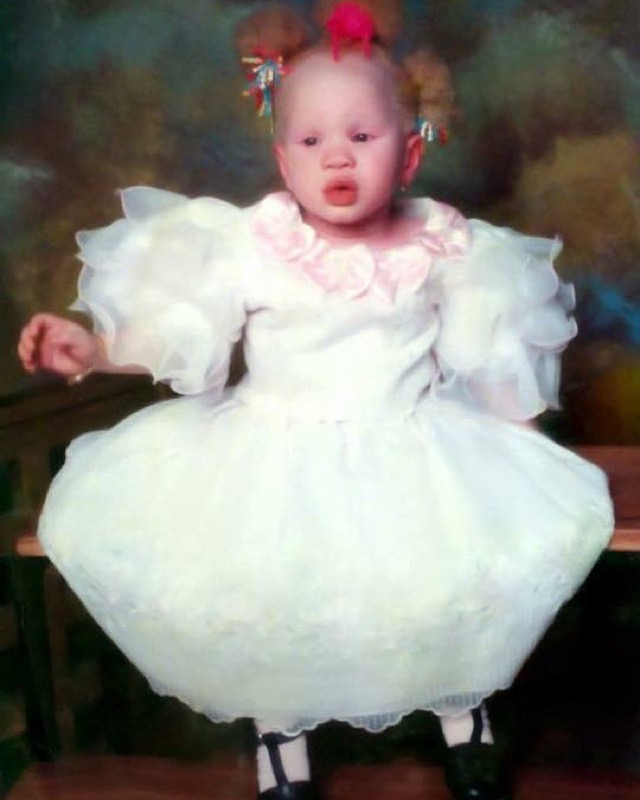 Advice to people living with albinism

People living with albinism need to accept themselves for who they are as well as love themselves before others can actually love them. I clearly understand that most of them do not get the necessary support they need from their parents and loved ones but I would want to encourage them to be strong and make themselves the best wherever they find themselves. Whether the society chooses to love you or not, ensure you love yourself and live your life to the fullest. Build your dreams and prove to the society that the colour of an individual’s skin does not determine one’s destiny. 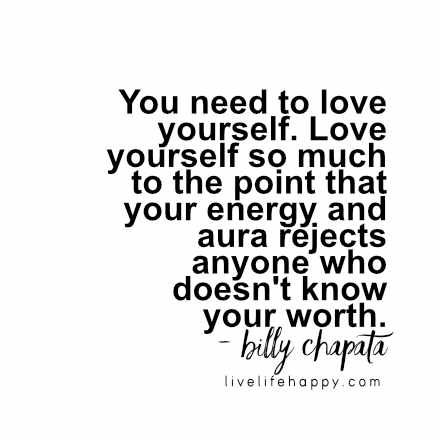 Advice to the society

The society we live in has a lot of misconceptions about albinism. For example, some people believe that a child living with albinism is a curse or punishment from the gods or ancestral spirits due to a wrong done in the family or the mother of a child with albinism slept with a white man.

Most of these misconceptions are of course not true. I see a need for awareness creation. People need to understand what albinism really means. We also need to understand that we are all created by God and the fact that someone looks different doesn’t mean such person should be treated badly.

The colour of an individual’s skin does not in any way affect the personality of the person. I have seen dark skinned people act like “devils”.

Let’s stop the discrimination against albinos. Let’s make them feel special because they really are a special breed. I have been privileged to meet a lot of them. They possess amazing potentials and talents that can only be discovered if we all look beyond the complexion. 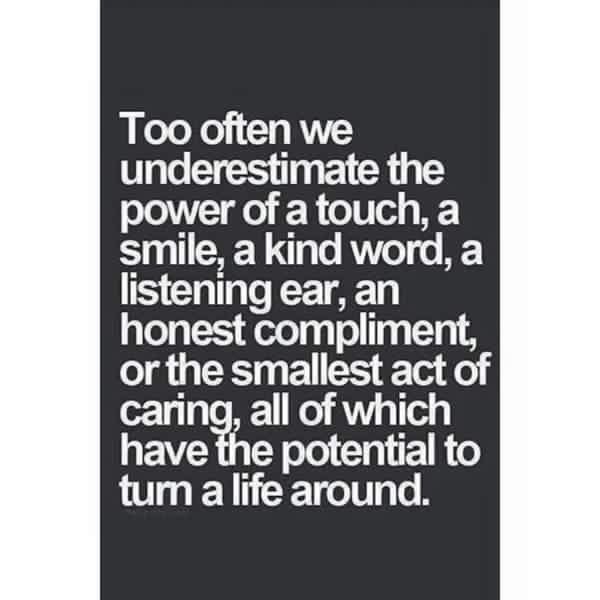 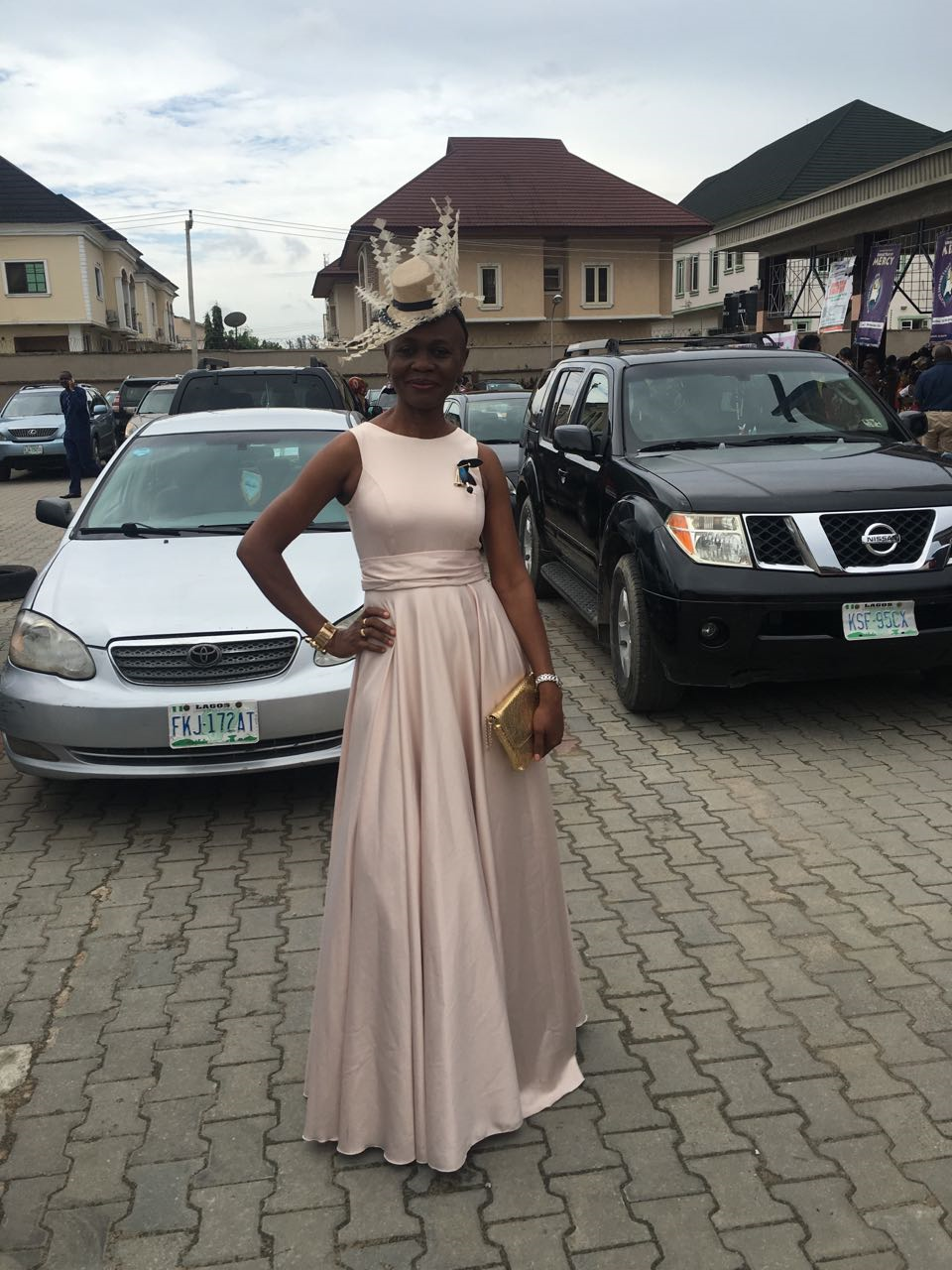 Mrs. Rita Chinwe Okagbare is a Health Promoter with the Federal Ministry of Health, Lagos, Nigeria. She is an MPH holder from the prestigious Queensland University of Technology, Brisbane,  Australia. She is married to Paul Okagbare and blessed with four lovely children 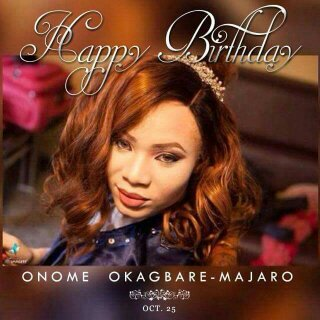